I don’t eat too much meat these days and one of the things I really miss is a good bolognese sauce. Since bolognese revolves so much around meat, it is not easy to veganize. However, I now found a really great alternative, mostly based on a recipe by J. Kenji López-Alt.

This recipe is based on a Hearty Vegan Mushroom Bolognese from Kenji. There are a few steps which I skipped or changed. My version is slightly less work and I also prefer it over his version 😁. First the final result. 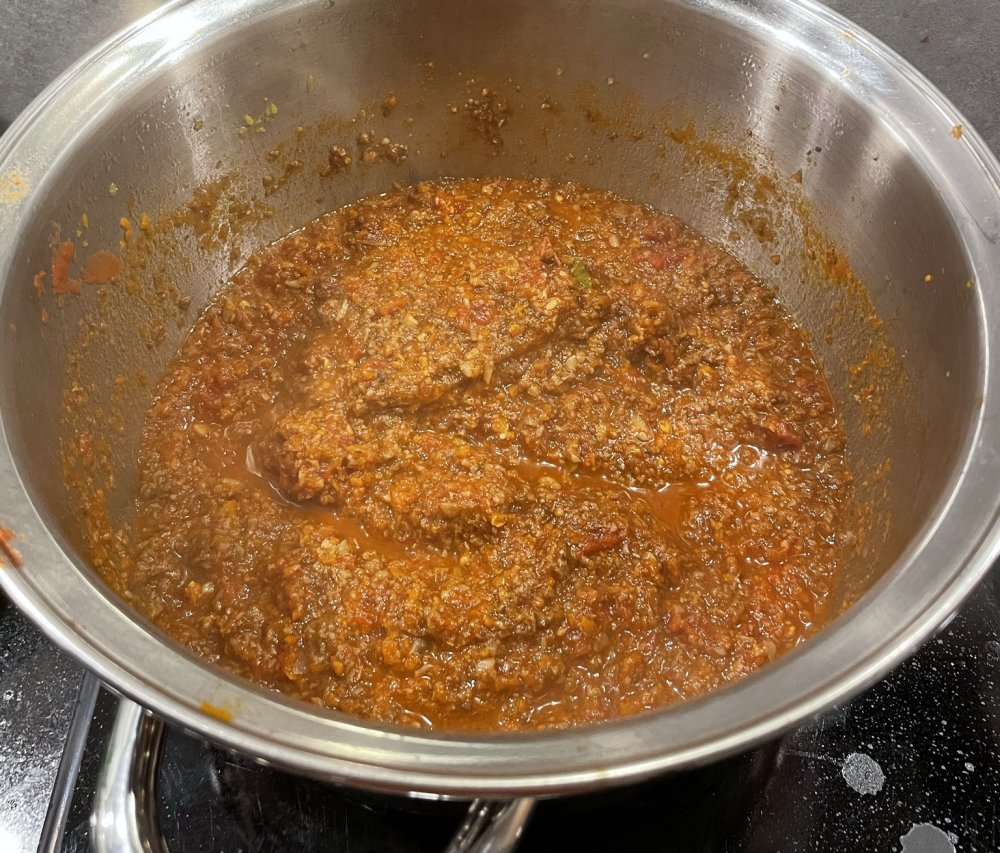 Start by preparing the soffritto/mirepoix. This is a mix of equal parts celery, onion and carrot. You can chop it by hand, but that can be quite tedious. I like to do it in a food processor, because it is easier to get the pieces nice and small. I think the size also helps with thickening the eventual sauce.

Preheat a pan on medium heat. When it is hot add some olive oil and the mirepoix. Cook for about 10 minutes until is gets nice and soft. 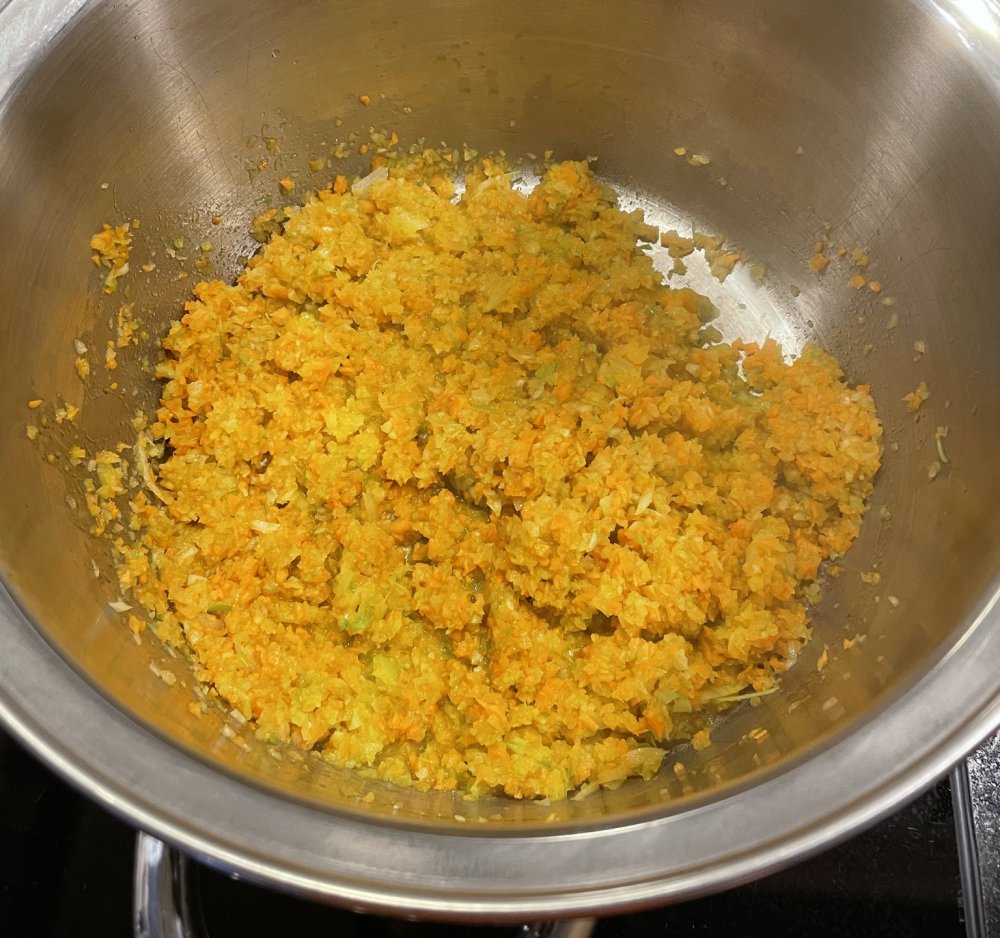 In the mean time prepare a mix of the taste makers. I opted for a mix of garlic, tomato paste, oregano, chili flakes, soy sauce and marmite. Garlic, oregano and chili flakes are always a good base for a tomato sauce. The tomato paste adds some extra savoriness and thickness the sauce a little. Finally the soy sauce and marmite combo add some of the umami which is normally added by the meat. Kenji also uses these umami bombs for his excellent vegan chili.

By combining all the ingredients in a bowl you can add them simultaneously. This method prevents wildly varying cooking times and stress 👍. 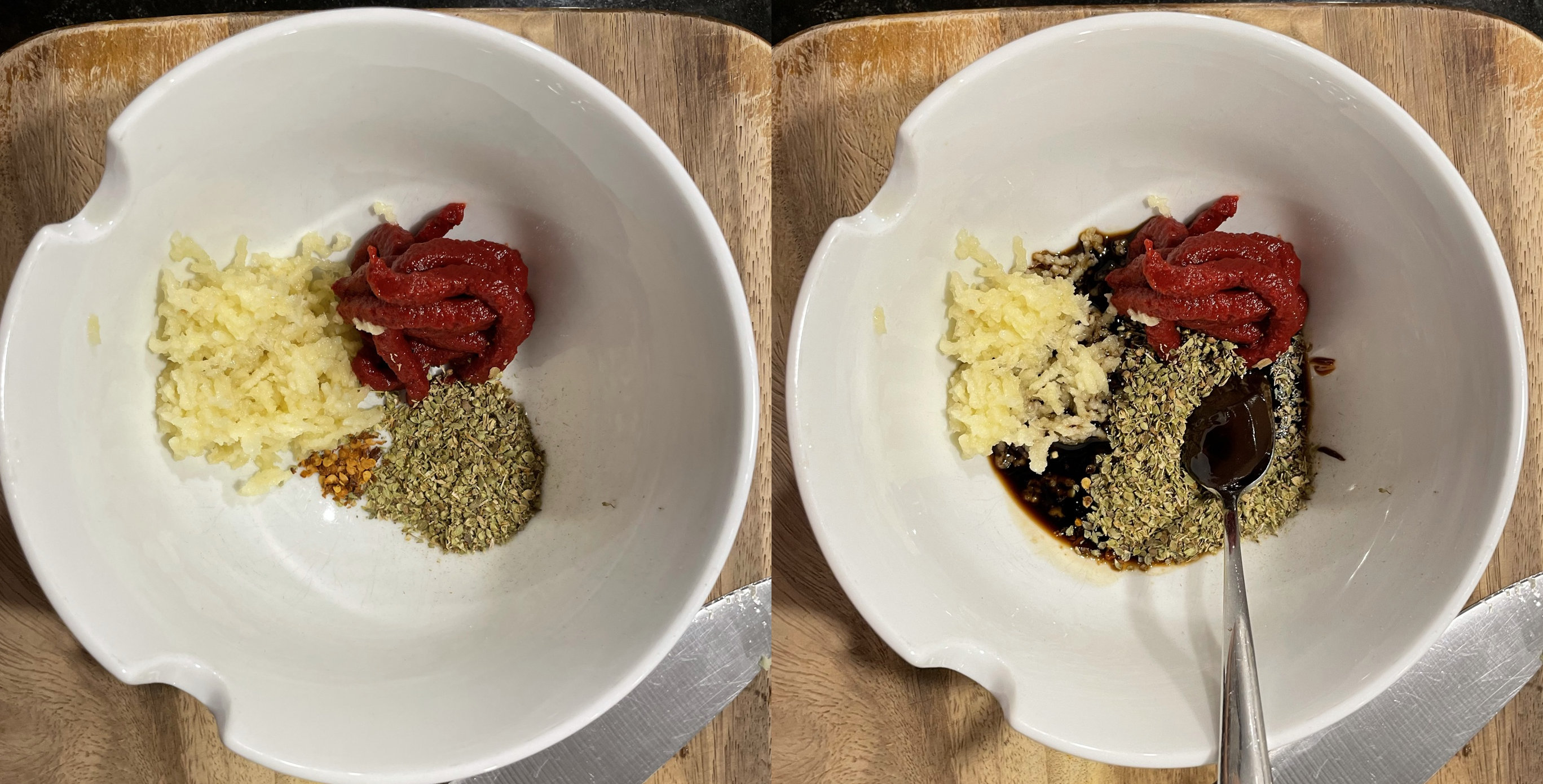 Once the veggie mix is nice and soft, add the bowl of taste makers. 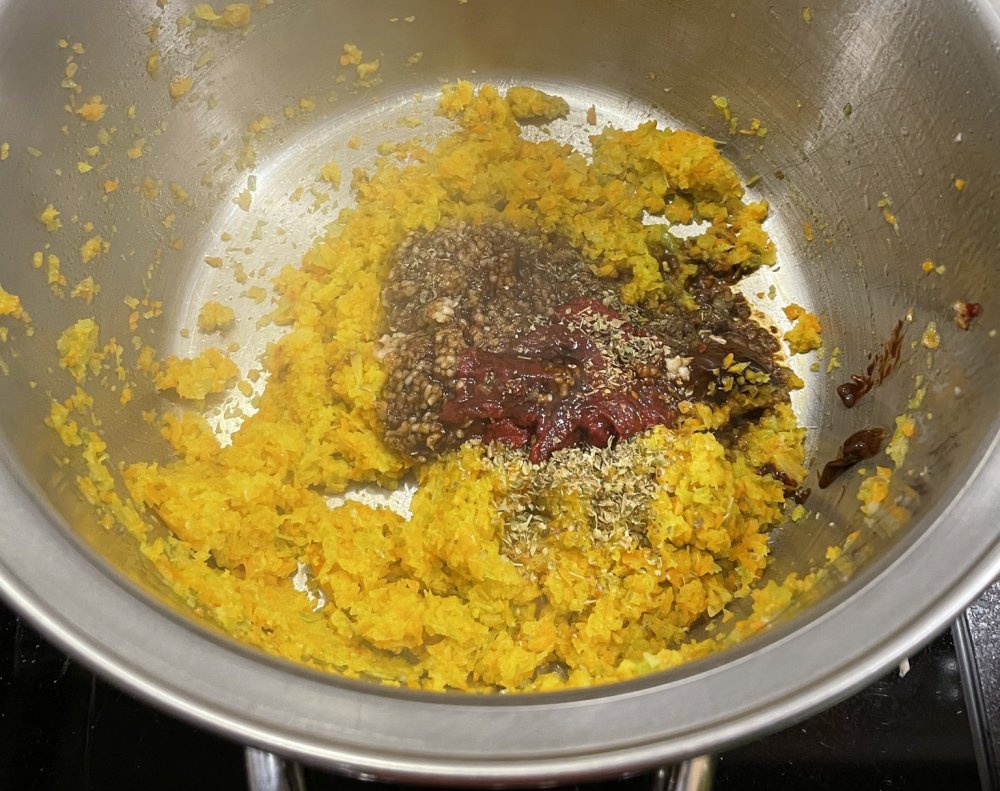 Stir it into the mirepoix and let it cook for a minute. 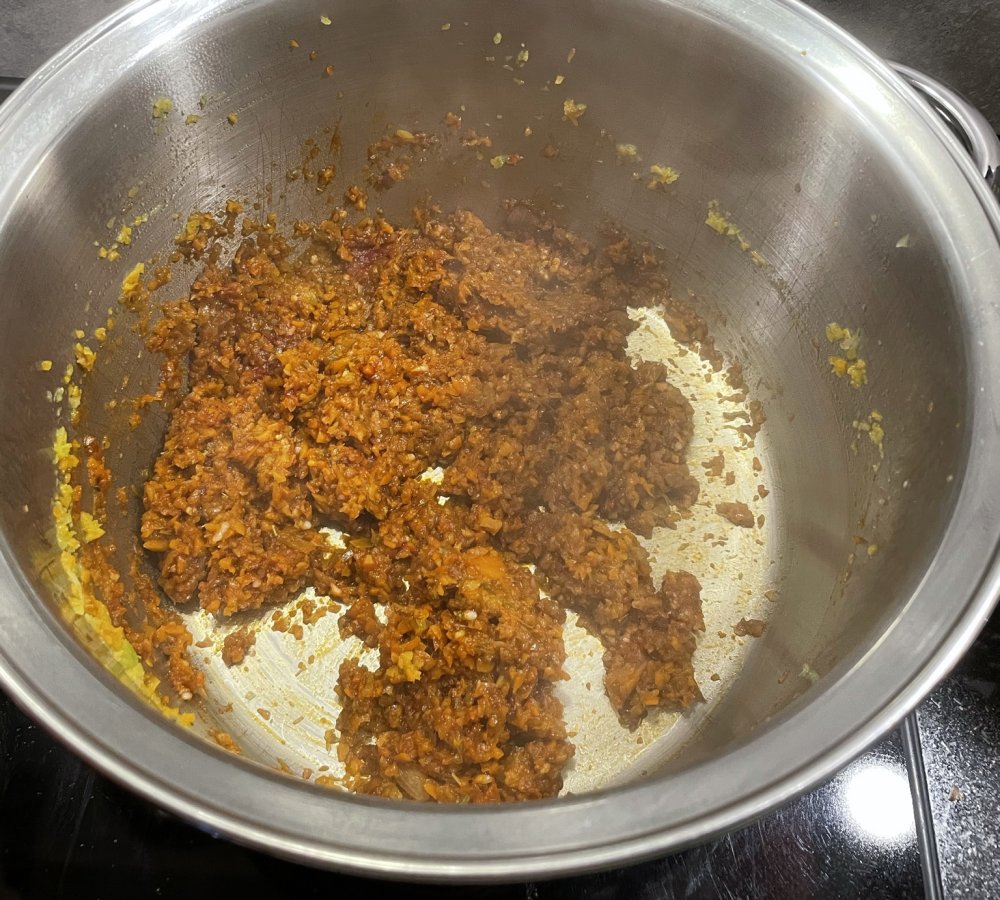 Then add some red wine. 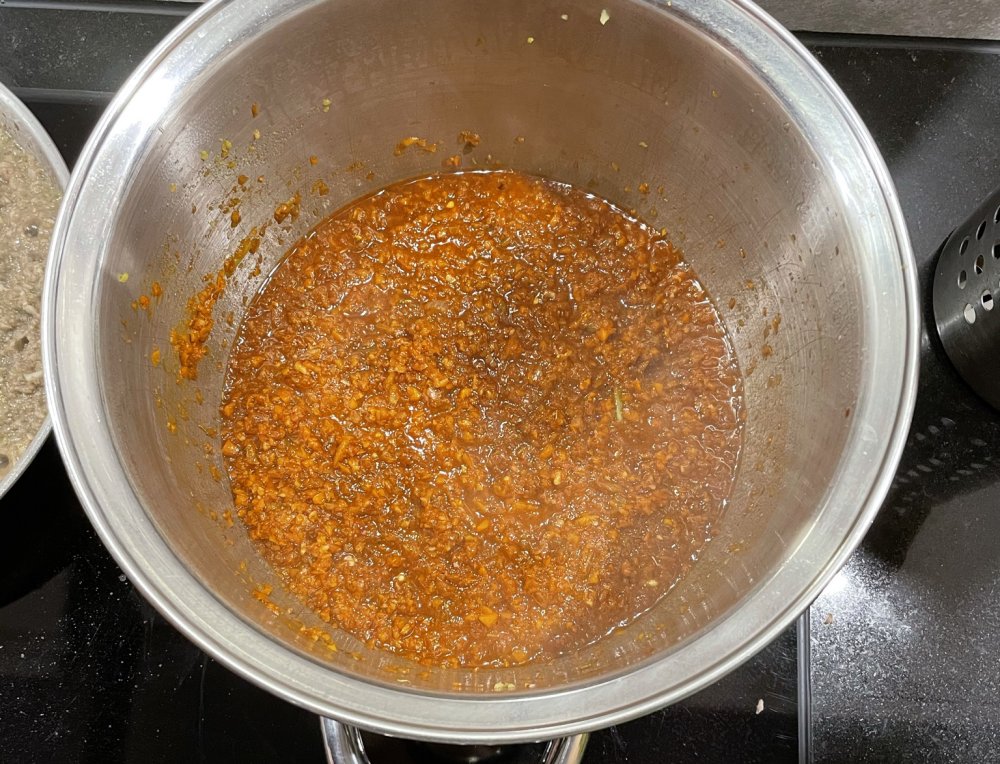 Let the wine reduce until a thick sauce remains. Thick means, if you scrape along the bottom, the sauce should slowly fill in the gap. 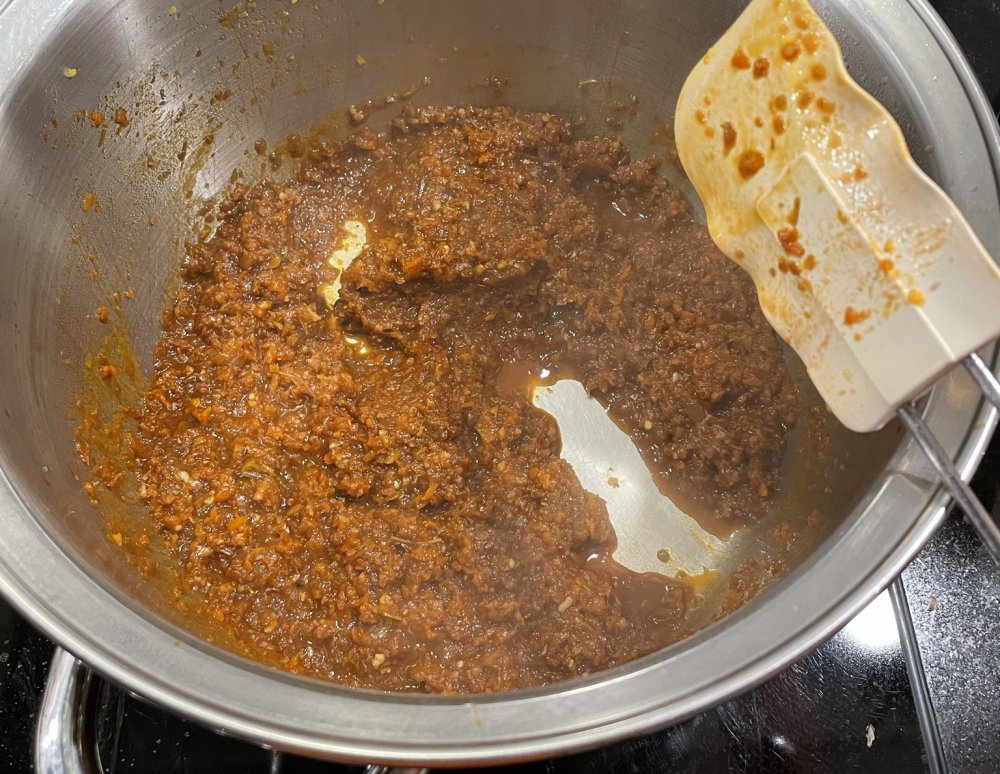 Then it is time to add the tomatoes. I use a potato masher to crush the tomatoes and get them into small chucks. 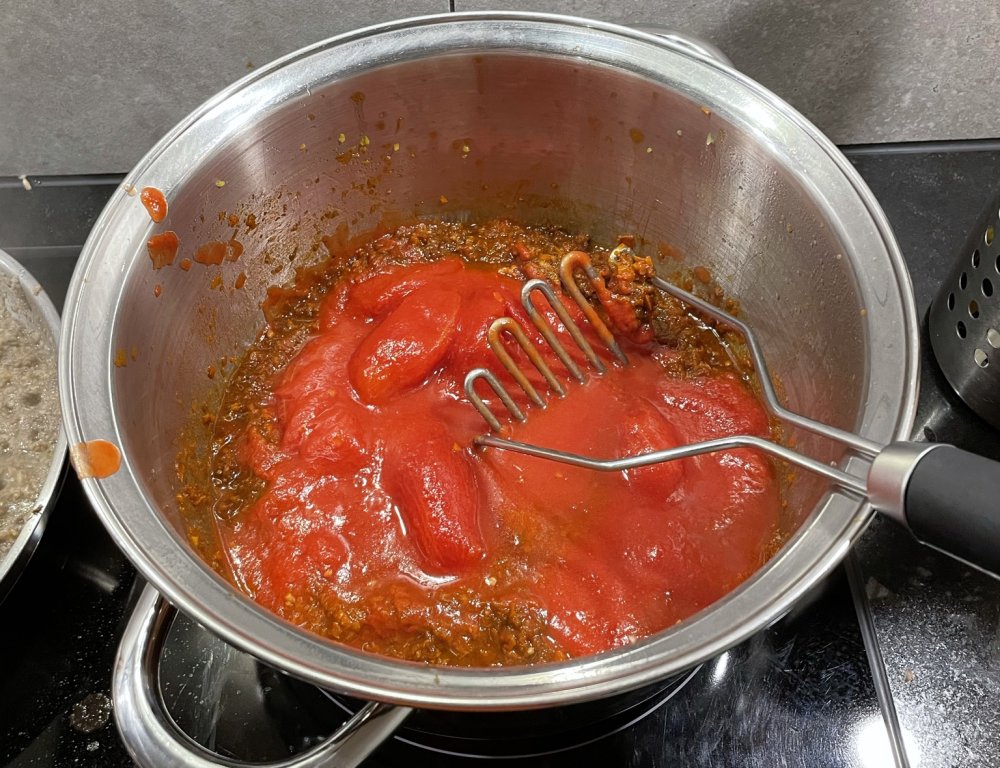 Add a few bay leafs and it is almost ready to simmer.

There is only one important ingredient missing: the mushrooms. The mushrooms provide some of the meaty texture and contribute to a slightly meaty taste.

When I have a lot of mushrooms to clean, I usually wash them in a salad spinner after a tip from Kenji. After cleaning, I use the salad spinner to drain most of the water from the mushrooms. 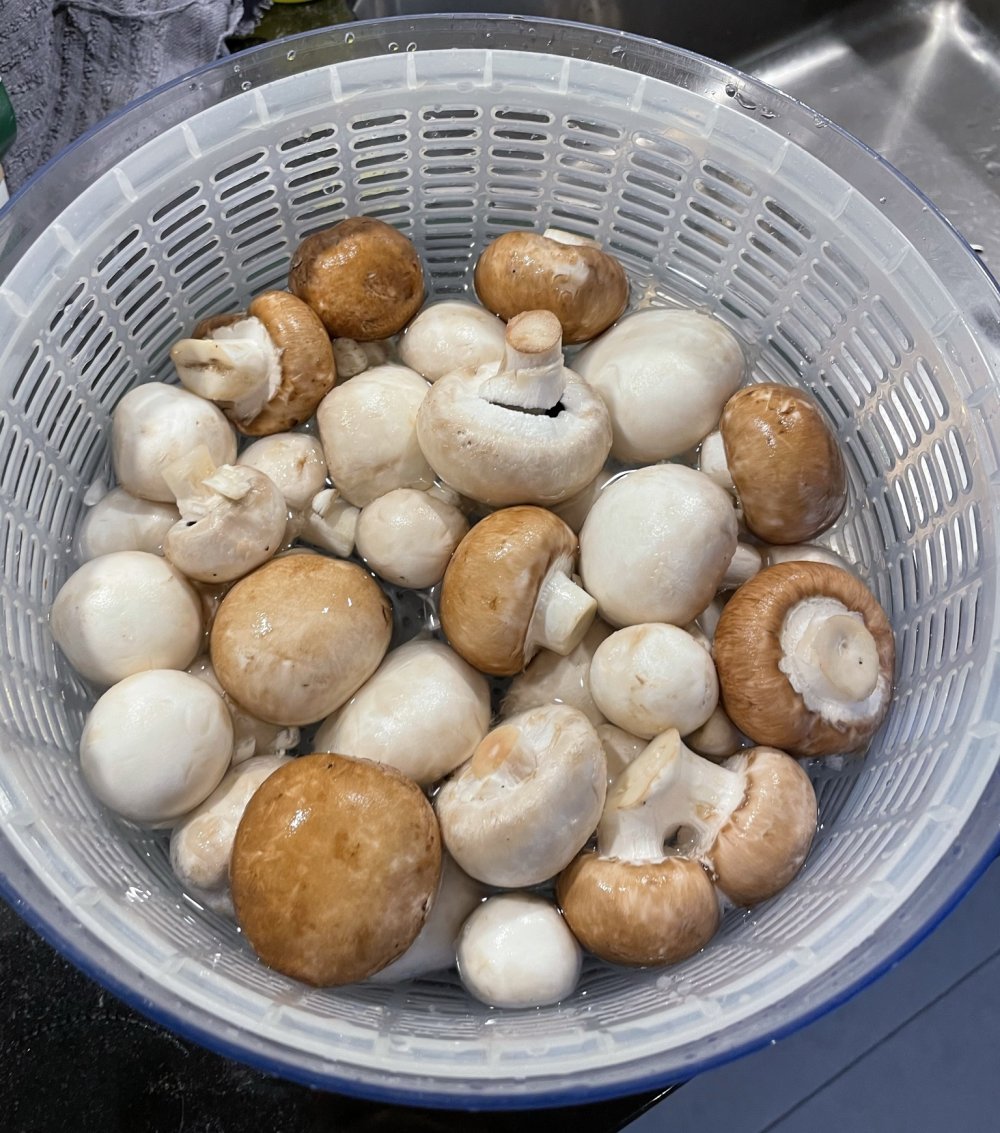 Then use a food processor to cut the mushrooms, or cut them by hand. If your using a food processor make sure not to fill it to the brim, or else only the bottom mushrooms will get chopped. Pulse, or cut, until the largest pieces are just a few millimeter.

Preheat a pan on medium-high. When it is hot, add some olive oil and the chopped mushrooms. Fry them until the moisture is gone and they are nice and brown. 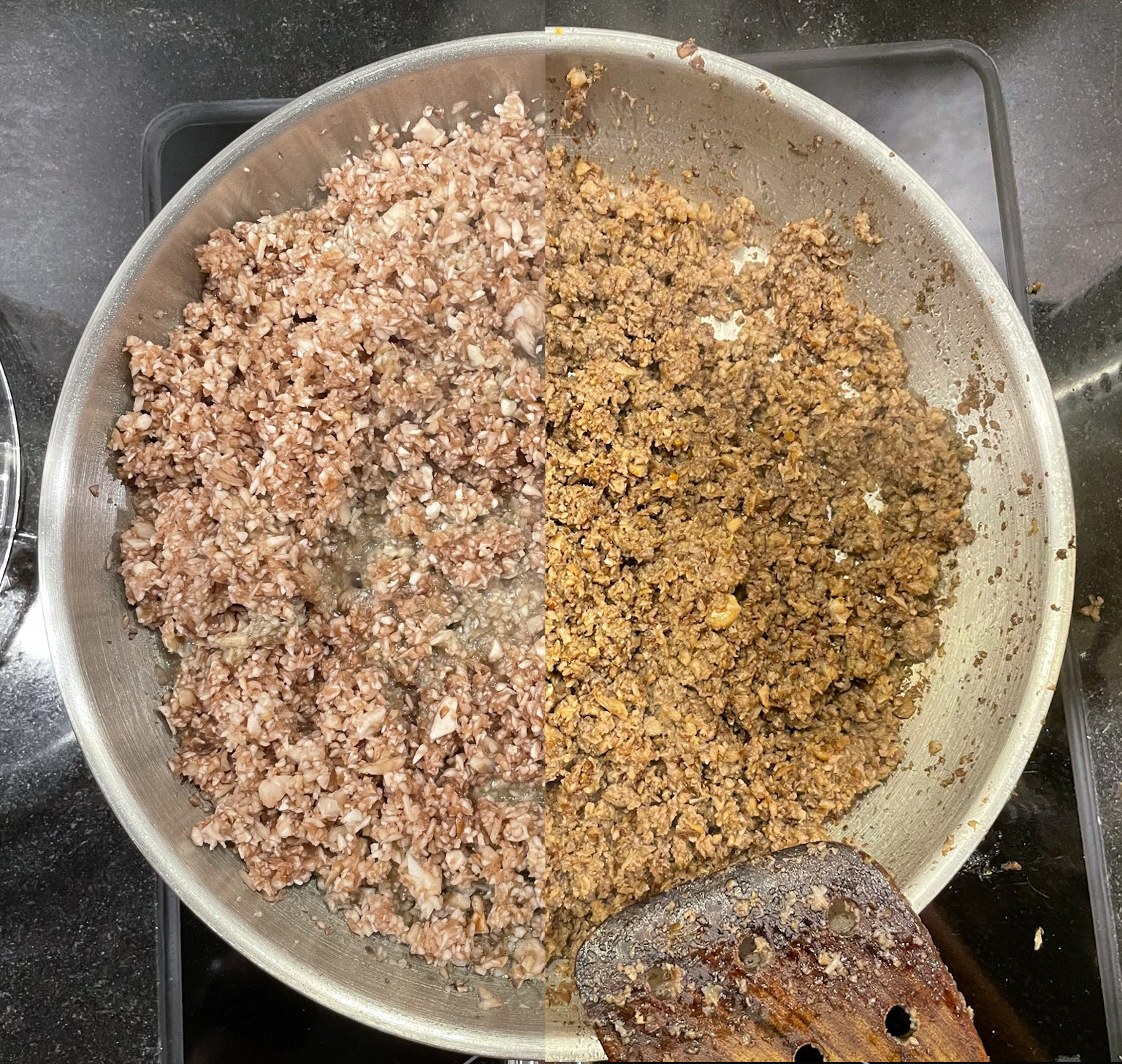 Then add the mushrooms to the sauce, stir it and let it simmer for an hour or so. 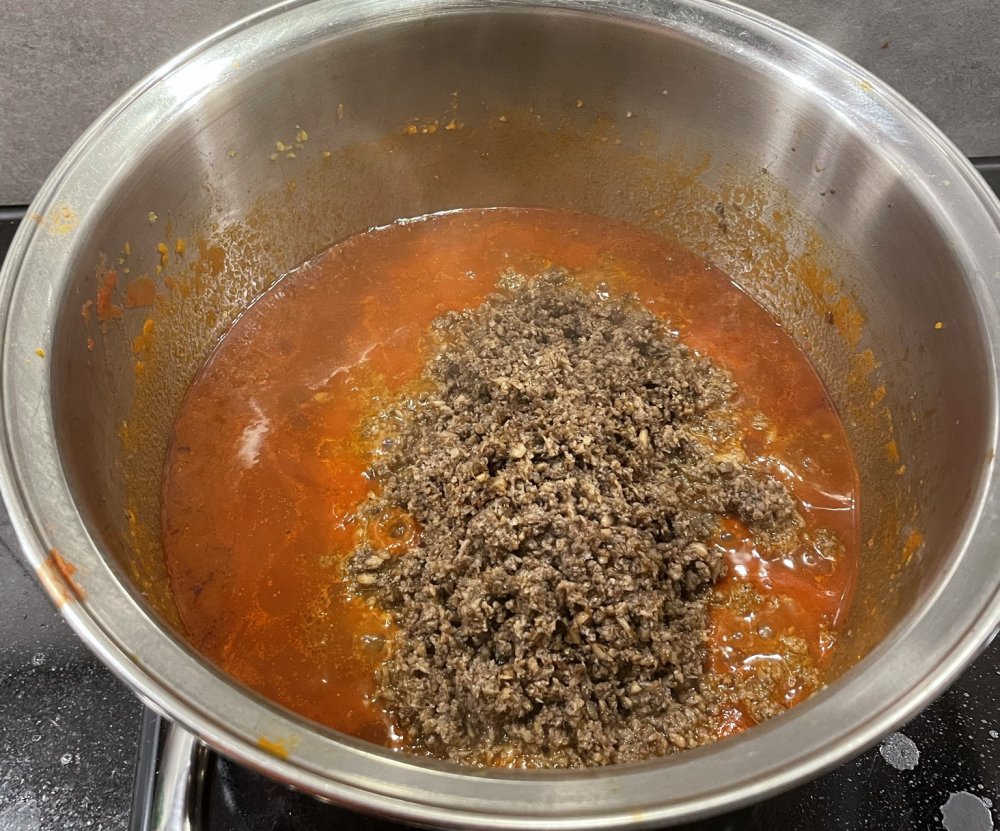 Finally you should end up with a delicious sauce. Kenji also uses eggplant to thicken his sauce a little. For this recipe I didn’t find it necessary. On the contrary, it was actually quite dry and I added a bit of water when I used it for a lasagna.

You could eat the sauce with some pappardelle or use it in a (not so vegan) lasagna as I did. You can also make the sauce in advance and store it in the refrigerator for up to a few days. It will only get better with time! 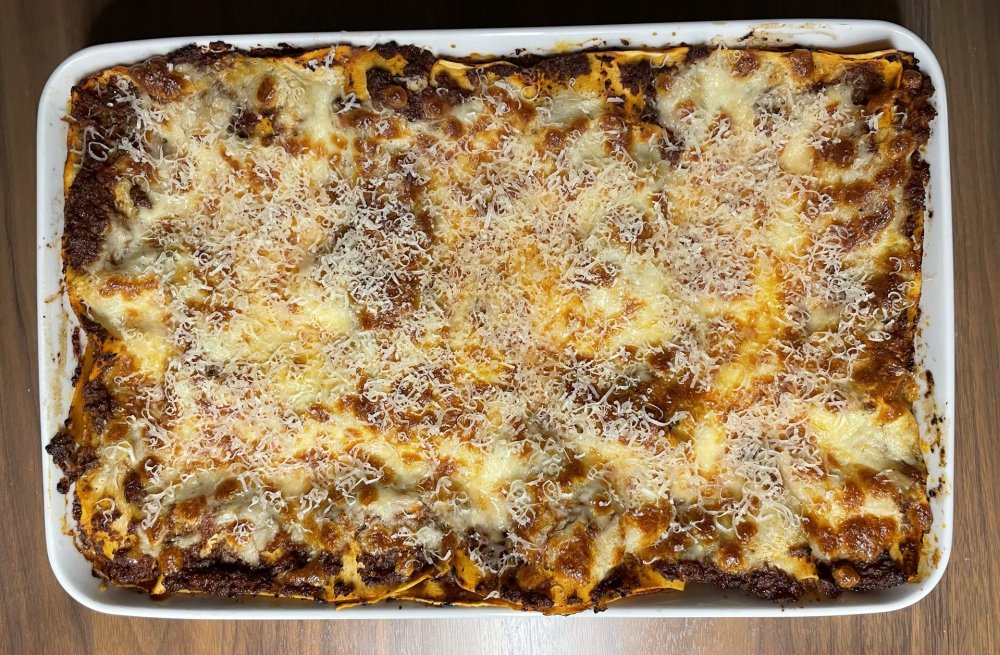