Recently I came across an article where the authors used a relatively simple model to forecast the total installed wind and solar power. I decided to do a similar analyses for the electric vehicle market.

The model used in the article1 works as follows: the quickest way to go from point A (no electric cars) to B (all vehicles are electric) is a straight line. Since you can not suddenly produce a number of electrical vehicles equal to the entire demand of new vehicles, a supply chain for the electric vehicle market has to be build up. Therefore three phases are identified in the model:

For the exponential growth phase I used data from the Global EV Outlook 20172 and for the linear phase I assumed a vehicle lifetime of 20 years. Based on these assumptions the following result is obtained. 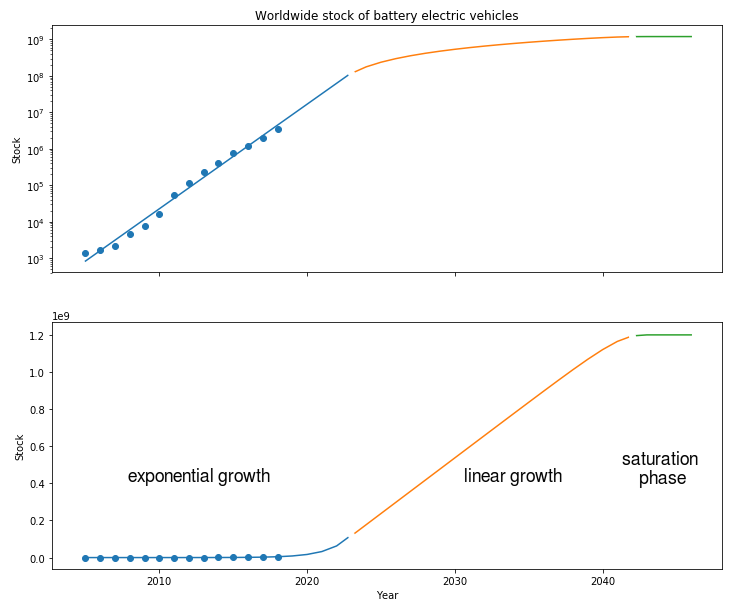 Assuming all vehicles will be replaced by electric ones, we have around 4 years of exponential growth of the electrical vehicle market in front of us. Around 2023 linear growth will set in and gradually all internal combustion vehicles will be replaced by electrical ones which will be done by 2044. Note that although the growth of the market seems impressive on the logarithmic plot, on a linear scale you can see that the electric vehicle market is still very small in 2018 at 0.28%.

Also note that the car lifetime has the largest effect on when all vehicles can be replaced. It would for example be possible to replace all vehicles earlier than 2044, by artificially lowering the lifetime of a car. In other words, incentivize people to demolish their cars and buy and electric one.