I was wondering if overloading functions in TwinCAT was possible, but I found out that this is not the case. I did however realize that overloading is possible using a few work-arounds. In this article I’ll show how to mimic this behavior with extended structs.

Overloading a function means that you can call a function with an identical name, but it can have a different number of arguments. Also the data type of the arguments and/or the return type can differ. Some programming languages support more overloading types then others, as you can see here in this overview.

Many methods in C# are overloaded. See for example the Sum method with an impressive 20 overloads!

Jakob Sagatowski showed in his post “The wonders of any” that you can call a single function with different data types. In order to make this work he uses ANY.

You can also use extended structs to have a single function which accepts multiple structs which use the same base struct. For example we have a Point struct with a x and a y coordinate.

And an extension of this struct which can also hold the time and a date.

Then we make a function which calculates the distance of this point with respect to the origin at (0, 0).

When we run this program we can see that it calculated the length for both points. 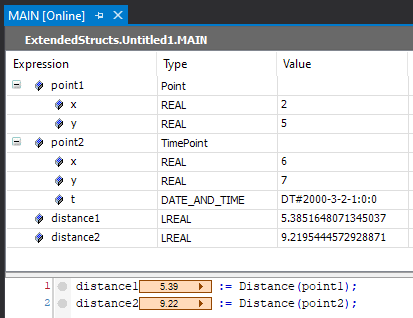 Using this trick you can prevent having to write/test the same function multiple times. I couldn’t find any mention of this possibility on InfoSys, so I just tried it out. I was a bit surprised and relieved that it worked!