Recently I was coding up a new function block and passed another function block by reference to it. Somewhere I forgot to check if the reference was valid before using it and 💥 Page Fault! After some thinking I came up with a few solutions how this can be prevented and even how you could catch mistakes like this at compile time instead of during run time. Let me show you what I did.

What is a reference?

Before diving into the subject it is good to briefly explain what a reference is and why you would want to use it. A reference is a link to an object, where an object can either be a data type (e.g. LREAL), a function block (e.g. R_TRIG) or a user defined data type (e.g. a STRUCT). A reference just passes on a link to the original object, instead of making a copy of it. References are very much like pointers in that sense, but references are easier to use.

The advantages of pointers and references are that this is more memory efficient, since no copy of the object has to be created each time it is used somewhere. Furthermore changes are directly made to the original object, so there is no need to return anything.

That all sounds very good, but as you might have guessed from the introduction is that it is not all fun and games. There are some drawbacks as well. In this article I will treat one of them: how to make sure you referenced something before it is used.

First let’s set up the problem. We have an simple function block Foo, which increments a counter each time it is called.

And another function block, UsesFoo1, to which Foo gets passed by reference. The implementation part of UsesFoo1 calls foo().

Finally we make a program Runner1 which calls UsesFoo1.

If we run this code, we’ll get a Page fault.

And if we log into the PLC, we see that, surprise surprise, it all went tits up when it tried to call foo():

In order to prevent the Page Fault, we can use __ISVALIDREF to check if the reference is valid before calling it. So the body of UsesFoo1 will change into:

If we now run the new code, we will see that it no longer crashes. However, when we login we see that the foo.Counter doesn’t increment. It just shows that there is no valid pointer. This makes sense of course, because foo is not assigned. 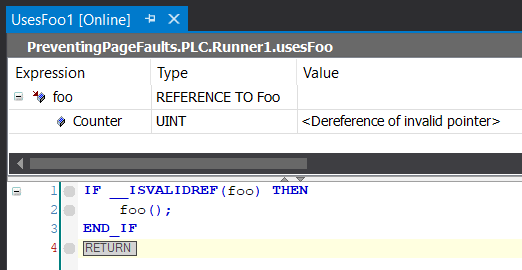 This solution prevents the PLC from crashing, but the code still doesn’t do what we want. In order for this solution to work requires you to remember that you need to first check the reference each time before calling it. Furthermore it is now possible the reference is not valid and thus foo() is not called at all, as we saw above. It might take you a minute (or hour 😛) to figure out why foo() is not doing anything.

A better solution would be to use VAR_IN_OUT. By using VAR_IN_OUT, we’re also passing the variable by reference to the function block. So any changes you make to foo inside UsesFoo2 will affect the state of the original foo instance.

Now when we build the code with foo unassigned, the compiler will start to complain.

In order for the program to compile, we have to initialize an instance of Foo in our Runner2 program and pass the foo instance to usesFoo:

When we activate the successfully compiling code and login, we see that the foo.Counter is now increasing with every call.

This is a much better solution than using __ISVALIDREF everywhere. The VAR_IN_OUT solution is a form of defensive programming the code is designed in such a way that making a mistake is impossible, or at least very difficult. Some minor drawbacks of this solution are that bit variables can’t be transferred directly to a VAR_IN_OUT variable (see InfoSys for a workaround) and the fact that each time usesFoo is called it needs foo passed to to it. The latter might get annoying if usesFoo is called multiple times.

A third option would be to use FB_init. FB_init is a function block initializer which gets implicitly called when the code is started. Implicit means that this method gets called automatically when the code is executed. So there is no need to call it explicitly by saying usesFoo.FB_init(). For more information there is also an article by Stefan Henneken on FB_init usage.

Let me show you how to use FB_init with our current example. First we add a new function block called UsesFoo3. To this function block we add an internal variable _foo which is a reference to Foo. Finally _foo gets called in the implementation part.

At this point the code will also generate a Page Fault when we run it, since _foo doesn’t reference to anything yet. In order to assign something to _foo , we add a FB_init method to our function block. To do so, first add a new method.

Then from the drop-down menu select FB_init. The other methods in the list are outside the scope of this article, but you can always have a look at InfoSys for more info on FB_reinit and FB_exit. 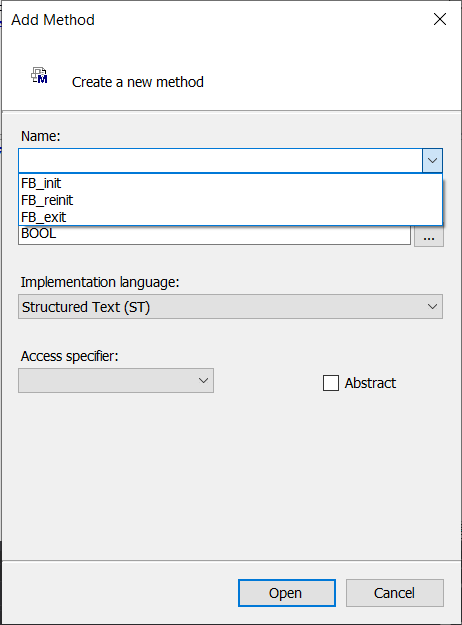 To execute the code we add another program and create two instances: foo and usesFoo. The function block initializer of UsesFoo3 gets passed the foo instance. Finally we call usesFoo() in our implementation part.

Now when we activate the code and log in, we’ll see that the counter is increasing. 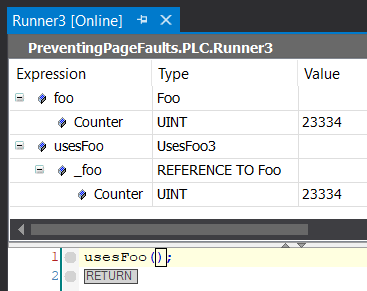 The advantage of the FB_init solution is that in case you forget to pass foo to UsesFoo3, the compiler will raise an error, so any mistakes are caught early on. 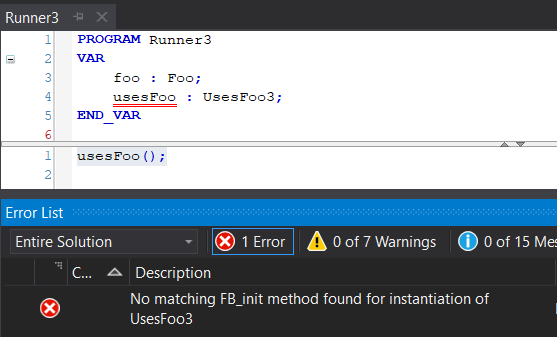